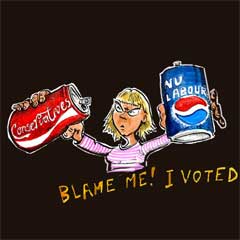 I get slapped awake every weekday morning by the Today programme outlining some latest Government outrage. And what I find hardest about it all, everything, the true horror of it is… I voted for this.

Blame me. I voted Lib Dem.

No! I really did! I was mysteriously overwhelmed with optimism at the last election, that we were on the brink of Parliamentary reform, and that coalition Government would mean that issues would be meaningfully debated and collectively decided.

I even tried to persuade my boyfriend to vote Lib Dem. Wisely, he ignored me, and spoiled his vote. He has done this every year, except for the time he voted for Lisa Lovebucket of the Free Party. I hope I have adequately immortalised the true extent of his smugness here.