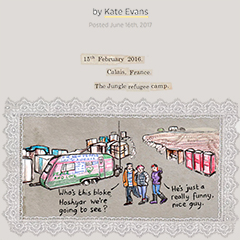 A few different media outlets have been intrigued by my latest graphic novel, and ran Threads excerpts. Vice.com took a section about the impressive volunteer relief effort in Calais. They laid it out really nicely, and it’s lovely self-contained section. Unfortunately, they then added the horrendously click-baity title “Inside the Notorious Camp Where Refugees Sewed Their Lips Shut” which, frankly, made me want to sew the sub-editor’s lips shut, but still. 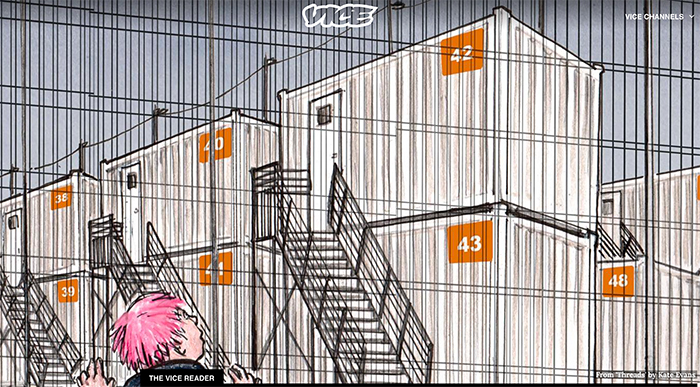 The Guardian ran a few pages about a central “character” in the book, Hoshyar, (who is really a real person, although that’s not his real name.) (Omg, my editor would have kittens about that last sentence. The Internets is so much more tolerant of rubbishy grammar.) The Guardian chose the more descriptively neutral title “A refugee’s story – in words and pictures“, so no desire to bait your clicks there. And bonus points for starting their extract with the uncompromising phrase “It’s not a fucking day trip. Fuck. Misery. Tourism. It’s not about a bunch of middle-class do-gooders off on a charity holiday.” Just in case you thought it was.

My favourite Threads excerpt is from The Nib. The title is poignant, and thoughtful. “What You Can’t Carry: Salvaging an Existence in a Refugee Camp“. The Nib also chose to focus on Hoshyar, but took a much longer excerpt, following the character in all the places he appears throughout the novel. Let’s write a happy ending for him. Let’s pretend. 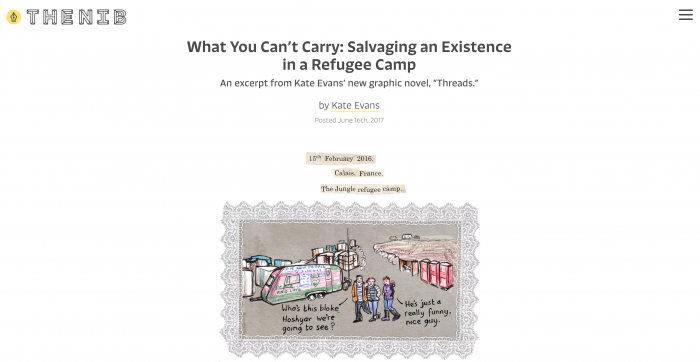 Hopefully there will be more Threads excerpts. Hopefully I will be able to feature more of them, and get the number of words in this post up to the 300 recommended minimum. SEO is a cruel taskmaster.