Kate Evans is the creator of the recently published, and critically acclaimed, Red Rosa, a graphic biography of the revolutionary Rosa Luxemburg, but her most recent comic is set not in the past but in the present: Threads: The Calais Cartoon is her account of volunteering in the Calais Jungle refugee camp, France. The short online comic shows the human side of a story that’s been so prominent in headlines.

I asked Evans to talk about her experiences in the Calais Jungle, and the process she went through to create the comic.

ROBOT 6: How did you come to Calais in the first place, and what role did you play there?

Kate Evans: My friend Mary initiated the idea of going over for the weekend. She asked my partner, and he asked me — we have kids, so it has to be one or the other of us. Since it was my birthday weekend, we decided that I would go. I wasn’t sure that I’d draw a cartoon about it. That wasn’t the main motivation for going. We wanted to be useful, to be active. We weren’t even sure if we would be useful at Calais — I think I assumed that the “real action” was over in Hungary or Greece, and I was slightly worried that we’d be do-gooding tourists rather than effective aid workers. I was wrong. The need is real and immediate and overwhelming.

What was your first impression, and how did that change in the time you were there?

I feel like the three days I was there was all a first impression. It took three days to make any kind of connection with the residents of the camp and the other aid workers, and once that had happened, of course, we didn’t want to leave. All the first impressions are in the cartoon. It’s one long sequence of first impressions: the rubbish, the desperate people living in dire, appalling conditions, the insanity of having to try to break into a lorry to get over the border …

Did you keep a sketchbook while you were there? How much of the comic was set in place on the spot?

I did bring a sketchbook. On the Sunday afternoon I drew a few pictures. I drew some caricatures of some of the Kurdish guys, and then of course, some kids wanted their pictures drawn. There’s a good reason not to take photos of camp residents — the U.K. authorities have been known to deny people asylum if there is photographic evidence that they were ever in another European country where they could have claimed asylum. So instead, I drew people, took photos of the sketches and then gave them the original drawings. I thought it would be nice to have a personal portrait to keep, something special. It would have been even better if I’d had a plastic wallet to give them so they could ever have kept it dry!

I have a few sketches of the buildings in the Calais Jungle too, but they’re not very good.

The comic wasn’t drawn on the spot, though. These were all visual reference materials for when I got home, and I used a lot of photos too. After I’d been home for a week, the words to the cartoon bubbled up and poured out of me, and the pictures followed from that. 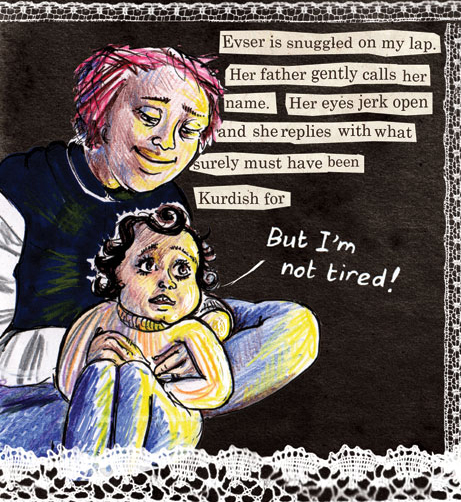 What inspired you to incorporate lace as a motif in the comic?

That was serendipitous. We were staying in a holiday apartment that was a former lace-making workshop. There were framed samples of lace on the walls, a catalog of lace by the visitors book and lace embedded in the key ring. After 24 hours, my friends started saying “what’s with all the lace?” (I didn’t! I’m not that observant.) I immediately knew that I had something that was uniquely about Calais, that actual town, that would literally weave the story together.

How do you report on something you were participating in — and obviously have strong opinions about — and remain objective? Was that a challenge for you in telling your story?

Remaining objective has never been something I’ve aspired to. I don’t believe it’s possible in any case. Any report of any situation is going to be subjective, it will carry a personal weighting, unless it’s simply a rehash of some previous journalistic cliches. In the words of Rosa Luxemburg (I use a lot of Rosa Luxemburg quotes these days), “The secret is to live the subject matter fully in one’s heart. Then one finds words that are fresh, rather than the old familiar phrases.” And I’ve never lived anything more fully in my heart than when being a mother around destitute, unaccompanied, refugee children. How could anyone not live that fully in one’s heart?

One of the great things about this story is the way you show us so many different individuals. How did you meet them and get them to talk to you? Did you seek them out, or did they seek you out?

Not being a journalist, and not even being sure that I was going to write a cartoon, meant that I was under no pressure to “find a subject” or “find a story.” I was there to help, and that’s what I tried to do. Events just unfolded around me. And I really only met a very few people, and had very few conversations with them. It’s just that those short exchanges were so meaningful, it’s like they were burned into my brain. It’s just so desperate there. Everything feels heightened about my memories, like someone has turned the color up, both the bad and the good. 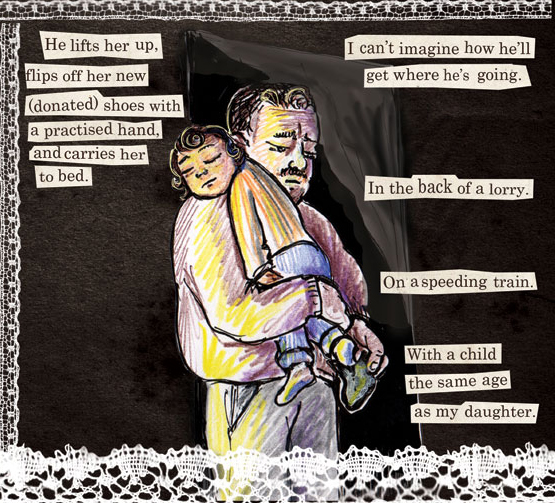 Were there any stories you chose not to tell?

Nope, it’s all in there. I juggled the sequencing of the events slightly, like, I had to introduce the musician guy at the end of the cartoon not the beginning, because the reader had to know about the warehouse where the guitar was that I wanted to give him. So I restructured events a bit. I’ve been given stick for saying I drank Coke, but I did! And my friends chain-smoked. It’s not good. That’s what we did.

I felt acutely conscious of being a privileged white woman with questionable, imperial, “charitable” heritage. Some of the representations I made are deliberately meant to be uneasy. Like, why are we invited to sympathise with the white guy who was handing out stuff and started a riot, when it’s a small refugee child who had his arm broken as a consequence? Who’s the actual victim here?

Will you go back to the Calais Jungle?

Of course. Everyone goes back. My friends have already been back several times. We all have to go there. We have to build a mass movement — to make this unignorable. The problem is not going to go away.

This interview was originally published on cbr.com on 12th August 2015