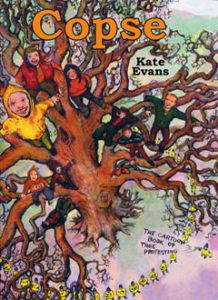 This is the history of the UK anti-road and opencasts protests of the 1990s, based on cartoon reports from the trees. I interviewed fifty activists, painstakingly transcribed them all, and combined their words with my story, and amazing pictures from some great photographers, particularly Andrew Testa, Adrian Arbib and Gideon Mendel.

I published the book myself, from a stout conviction that the book should cost under a tenner, an inability to get a publisher to understand what it was about, and a complete failure to appreciate what the role of a publisher actually entails.

Publishers sit in offices, making sure that books get publicity, that they get distributed, that the ISBN number is registered, and that it stays in print. I failed to do any of these things. I had been working hard on the book, while partying hard with Forest Gate squatters, and was now burnt out and sick of the sight of it. I lugged some boxes around some soggy festivals, and got so drunk that I can’t remember the launch party. ‘Friends’ would pop by and say “I took a box of books to a social centre in Edinburgh!” and I’d say “Oh. That as worth 180 quid. Oh.” With what money I did collect from the first print run, I bought a truck and drove it to Hungary. It has been out of print since 2001. The book, not the truck. (The truck, I am pleased to say, is still somebody’s home.)

It’s a bloody good book though.

I also have some chapters for sale:

…The eviction was code named ‘Operation Garden Party’ by the police, and cost £2 million. It lasted for five days working around the clock and, in terms of numbers of people removed and bailiff hours worked, is the largest and longest eviction in British history. That Monday morning there were hundreds of people on the roof of Claremont Road.

JUSTIN: Claremont Road was opera, dramatic opera. The eviction, more than any other eviction I’ve been in, I really felt that we were turning this event into epic theatre. When you see all these hundreds and hundreds and hundreds of blacked up, helmeted nutters with big sticks all running into the street: a never ending sea of black, the police, all wearing their riot gear. And everybody cheering; everyone was cheering them in, which must have freaked them a bit. Everyone was going, “Yay! Here we go. Hooray. This is the beginning.”

There was this pause, everyone went a bit quiet after the first cheer, and the person who was operating the sound system in the Tower had been waiting for that little lull. They kicked in with The Prodigy: “WHAT WE ARE DEALING WITH HERE IS A TOTAL LACK OF RESPECT FOR THE LAW” Then three hundred and fifty people started dancing! That moment in my life was just stunning, it blew me away. There was all these police and you could just see the confusion on their faces. That total defiance, and the theatre of it all: they were there with their fucking big sticks and we were dancing.

Part of what we do as activists, if we do anything, is we bring a thousand people to watch a scene [of destruction]. Its a Situationist thing. We bring all these people in to watch. We bring coppers, we bring security guards, bailiffs, TV crews, to see something that they wouldn’t see otherwise. They’ve got to get their heads around it afterwards.

I think quite a few of them never quite got their heads around what we were about at Claremont Road.

So Stanworth Valley was muddy, and you didn’t have any burners in your treehouses and you were wet for months on end.

GREMLIN: Yep. But we were hard.

And you had to eat porridge for breakfast.

GREMLIN: Every day. And Donga slop. Which was basically swedes and cabbage. And no flavourings. Boiled to a grey mush. Normally by Becky or Busker Paul. And we used to sit around the fire pit and when their backs were turned, flick curry powder or stock cubes in.

ROY: That were way back when.

GREMLIN: In the good old days. The even better old days.

ROY: We could make porridge now.

ROY: We’ve got no sugar or anything to go on it.

GREMLIN: We used to have mud on our porridge at Stanworth.

If this bizarre excerpt hasn’t put you off, buy the pdf: Stanworth Valley.

If you are too skint for two quids, you can email me via the contact form and explain what you want, and how poor you are. I am blaggable. Now read on for more free excerpts from the book, and some other random cartoons about being a crusty in the nineties. 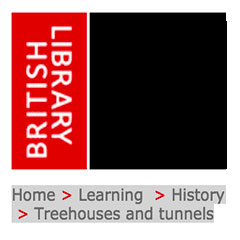 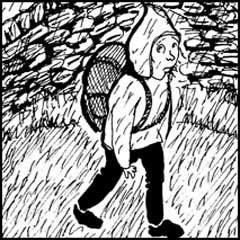 This cartoon is mainly a send-up of life at Lifespan/Townhead Collective housing co-op, with some Glaneirw, some Orchardton and a ...
Read More

Some subcultural cartoons about hitching, hippies and headlice ...
Read More 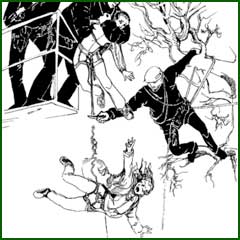 Ten thousand words from ‘Ten Thousand Trees’, the chapter from Copse: the Cartoon Book of Tree Protesting which details the fight against the ...
Read More

What would you do for money?

A poem and artoon about global capitalism. This cartoon originally appeared in Copse: the Cartoon Book of Tree Protesting. While ...
Read More

Brynhenllys Farm, Cwmtwrch, South Wales. Bulldozed for an opencast coal mine, October 1995. We fought them on the beeches… This ...
Read More 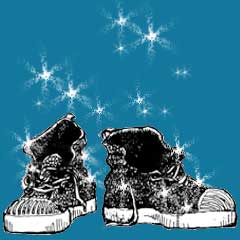 The eviction of Claremont Road

The Claremont Road eviction lasted from 28th November to 5th December 1994. I was there for the first 24 hours ...
Read More

was the spur for my initial involvement in political activism. The Tories knew what they were doing when they criminalised ...
Read More 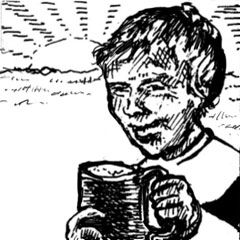 The Diggers of George Hill

I used to clean houses on St George’s Hill. It has changed somewhat since Gerrard Winstanley’s time ...
Read More

One Comment on “Copse: the Cartoon Book of Tree Protesting”