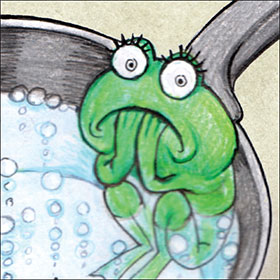 Cartoons from my regular strip in New Internationalist Magazine. We are all boiling frogs.

Image description: two frogs in a pan of water on a gas ring. First frog exclaims, in anguish, “Melting ice! Record-breaking temperatures! Unexpected flooding! We should be worried about climate change RIGHT NOW!!!”. Second frog is laid-back and unworried. “Oh, you’re such a doom-monger. Why can’t you just relax and enjoy the lovely, warm conditions.” In the next panel, bubbles of simmering water start to appear. Second frog exclaims happily “Oooh! Look! A fun, new jacuzzi effect!”

Image description: two boiling frogs in a pan, one worried and the other laid-back, as before. First frog exclaims (with a reference to the Pepe The Frog meme) “OMG We’re cartoon frogs! Are we politically suspect? Have we been co-opted as an unwilling symbol of 21st-century fascist ideology?” Second frog attempts to correct her by saying “Not ‘fascist – ‘Alt-Right'”. The first frog responds strongly “No! It’s the rise of fascism cloaked in a veneer of millennial irony! It’s the racist Far Right trying to be fashionable!” In the second panel, the laid-back frog is suddenly wearing a brown wig, sunglasses and a khaki coat similar to the one Melania Trump wore to visit the children’s’ refugee concentration-camps in the US. She comments “Melania is my style icon. Do you like my coat?” First frog is shocked. “NO, I DO NOT LIKE YOUR COAT!!!” Second frog responds “I really don’t care”.

Image description: the same two frogs as before. First frog exclaims “Fascism! War! Famine! Doom! What can I DO?!!” and second frog cheerily replies “Do what I do. Cultivate an attitude of mindlessness.” In the next panel, she gives a duckface pout and takes a photo of herself while explaining “Facetune your newsfeed to an endless stream of promotional messages and celebrity gossip. And remember, a perfect world starts with the perfect selfie“. In the final frame, the first frog has some syringes stuck to her face while second frog approaches with more and exclaims “And with this amount of botox, you’ll be physically unable to frown!”

Image description: The worried frog from the previous cartoons is this time joined by a strange male frog with bloodshot eyes clutching an orange box with an ariel on it. He says “My 5G Signal-Detectifier (only $139.99) is picking up a popping noise!!!” The worried first frog points out, since they are sitting in a simmering pan “But that’s the sound of boiling water…” In the next panel, bloodshot-eyes frog stares up at the steam rising from the pan and exclaims “LOOK! VAPOUR!!! Chemtrails in our midst!!!” while worried frog calmly replies “Maybe an indicator of a boiling water problem?”. In the final panel, the weird male frog leans in very close to worried-frog and shouts “QUICK! Protect yourself from MIND CONTROL with this TIN FOIL HAT!!! (just $499.99). Worried frog responds, since it’s clearly visible that they are both sitting in a pan of water on a burning gas ring, “Don’t you think that the real problem here is the burning of fossil fuels?” to which Scare-frog responds “THAT’S JUST WHAT THEY WANT YOU TO THINK!!!!!”

Image description: finally worried-frog decides to take action. We see her in the saucepan of rapidly boiling water, wearing the Extinction Rebellion logo, speaking enthusiastically to a small group of yellow snails. “ENOUGH IS ENOUGH! It’s time to rise up! Our demands are simple! Stop the water boiling! Turn off the gas!” In the next panel, she looks on dumbfounded as the snails discuss her demands. “Simple, you say? And yet, we must interrogate them.” “What? And leave the oppressive structure of the saucepan unchallenged?” “I am a seasoned campaigner. We can’t have young upstarts oversimplifying our demands.” “Oooh, what are you seasoned with?” “Garlic butter and salt, since you ask.”

Image description: worried frog is chained to the saucepan handle, making her protest clear. “Just TELL THE TRUTH! The water is nearly boiling us to DEATH!”

Journalist frog replies “Ah, well, that depends on if you believe in ‘boiling water’ theory. I mean, it’s just a theory.”

“WHAT? No! It’s scientific FACT! Look at the evidence of your SENSES! It’s happening ALL AROUND US!”

“Ah, yes, but I hope you understand that, in order to preserve journalistic neutrality on this issue, I have to balance the views of someone who believes in reality with someone who doesn’t.”

Image description. Two frogs in a saucepan of water, on the gas, bubbling away as usual.

Climate Nihilist frog:” WE WILL BOIL! WE ARE DOOMED! THERE IS NOTHING WE CAN DO!!!

Worried frog: “What? No. There totally is. We can stop burning fossil fuels.

Nihilist frog: IT’S TOO LATE!!! NOTHING WE DO WILL MAKE ANY DIFFERENCE!!!

Worried frog: “But we could implement a measured programme of decarbonisation…    Hang on. Are you scared of  making structural changes, so it’s easier to pretend there’s no point and it’s all too late?

Nihilist frog: Don’t talk to me because I am actually already dead.

(I apologise for the lack of any other image-descriptions elsewhere on my website. It’s something that I will be working on from this point forward.)

The original two frogs, the nationalistic, happily ignorant one, and the worried politically-aware one are pictured standing on the branch of a tree. Nationalist frog is sawing away at the branch at the point where it connects to the trunk. She says “I’ll go out on a limb here and say, we don’t need the rest of the tree. Fat, bloated, bureaucratic. We can’t have other forest creatures coming over here and taking our nuts.” In the next panel, she continues “I remember when English nuts were taken seriously… Tea… cucumber sandwiches… national pride…” Worried-frog replies “But is ‘tea and cucumber sandwiches’ a coherent negotiating strategy? Surely we should keep some of the structure of the tree intact?” In the final frame, nationalist frog is sawing enthusiastically and exclaims “Nonsense. We’re a major branch. We’ll have a greater impact if we go it alone.” As the branch begins to fall out of the frame, worried-frog says “I didn’t vote for this.”

4 Comments on “We are all boiling frogs…”