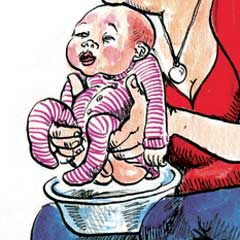 This cartoon sums up the first six weeks of my daughters life, but at the point when I drew it, I started using nappies with her. Now, two years later, we are finally toilet training, and I thought I’d take a look back at “EC”, and discuss what we learned.

I was enthusiastic about elimination communication. It made sense that my baby should be able to communicate when she needed to wee, and going nappy-free felt like a move to a more authentic, natural, pre-consumerist mode of parenting. I also wasn’t relishing the real nappy/launderette experience – it works out about twice the price of buying disposables, which is really galling. When my previous child had got past six months, and was doing Real Poos in Real Nappies, we’d resorted to military-style commando raids on the launderette – swooping in and slamming a weeks worth of nappies into a large machine before anyone else came in. Oh, the smell!

Things went well from about day three, when we first held her over a bowl, and she obligingly pooed. Wiping her little bum would produce another poo, then another. I tried putting her in a nappy overnight, and she came out in instant nappy rash, which was a strong incentive to keep her nappy-free. So I dozed with her, waking at every wiggle, and started to feel her timings. There were times when she just waked for a wee or a poo, and went back to sleep without a feed. I did feel smug. I did get pooed on. It was a nice babymoon. We liked it.

I received some unexpected encouragement from my mother-in-law. When I explained what we were doing, she said “Oh, we always used to do that. Every time you change the baby, you hold the baby out. You put two sheets of newspaper on the floor, and you hold her out.” and she mimed the pose to hold her in [the same as in the cartoon]. Pottying a young baby used to be a parenting norm.

So, why did we stop? What discouraged me? The internet didn’t help. The elimination communication forums featured anguished posts from people for whom it wasn’t working. (The parents who were getting on fine with EC had no reason to post!) But it did become clear to me that being nappy-free with a newborn didn’t mean that I’d necessarily get a precociously toilet-trained toddler. Babies aren’t always so obliging.

My family didn’t help – or rather, I didn’t make them help. When I went to stay with them for a fortnight, I put a nappy on the baby, rather than hand her around with a bowl and a towel. I did then whip the nappy off, and hold her over the toilet at strategic intervals. My grandfather’s Zimbabwean carer was appalled. She had already had to have words with me about 1) not wrapping the baby in lots of blankets (Zimbabwean women like their babies well wrapped) and 2) dressing the baby in black, which is the colour of death and not suitable at all. Now, she confronted me :”Why are you trying to make that tiny baby use the toilet? She is far too young for that!”

Oh. I asked her, what do you do in Africa for toileting a baby? “We use nappies! And we wash them well, and we get them very white!” My mumbled replies about “organic hemp nappies which are meant to be off-white” did not fall on approving ears. My ideal of becoming more connected with tribal, pre-capitalist parenting crumbled.

They were great! I could swaddle her up in layers of cloth and leave her for hours on end. I could do Other Things. I could Draw Cartoons! I don’t think you save time overall by putting nappies on an infant, because they toilet train later, and washable nappies do represent a certain amount of work. But by spreading that work out, I was able to juggle more commitments in the meantime. And I wondered how much I had been motivated by a desire to prove myself the perfect attachment parent, which ultimately, and paradoxically, isn’t about my child’s needs. Hence the title of this blog post.

Unfortunately, the nappies we had were complicated things with layers and poppers and strings. I couldn’t quickly whip them on and off. Once she was in them, EC went out the window.

At twenty months, Z became quite enthusiastic about using a potty, and the time we’d put in with EC made us feel confident to try to toilet train. We were doing parent-led pottying, predicting or “catching” her wees – she was too young to tell us before she wanted to go. But it was summer, so we forged ahead. By this time, we’d moved off the isolated hilltop with the spring-water supply, to somewhere with conventional plumbing and a washing machine, so occasional soggy sofa incidents weren’t quite so irreparable. (I love this washing machine. I really, really love it.)

So what did we learn from EC? I do think we unlearned a lot of the laziness of disposable nappy culture. Modern disposables are so damn convenient that they completely divorce us from our babies bums. There’s a sense of panic that they induce, that any un-nappied moment is a moment of impending disaster. Conscious nappy-free time with a baby then means that nappies become an accessory, rather than a necessity.

I would definitely recommend the “hold your baby out” manoeuvre for newborn nappy changes, because sitting them up with their knees by their chest helps their farty little bowels. There is a really annoying cycle of “change his nappy. Oh, he pooed in it straightaway. Better change it again. Oh, he pooed in it straightaway.” that you can break quite easily by judicious use of  a potty (or two sheets of newspaper, if you want to be old-school).

EC could be a good idea for babies who are likely to have an intellectual disability. Think about it. We train our babies to wee when they are covered in warm cloth, then we expect them, as soon as they become verbal, to reverse this and wee in the fresh air. It does make sense to get the associations right to begin with.

If I was just doing my baby, not doing cartoons, writing books and blogs and generally being distracted, then EC would be something that I could have persevered with. And if more people do it, then more people can do it – I stopped in part because I didn’t expect my family to do it, but I’d help any family member who wanted to try it.

If I was ever going to buy real nappies again, which I’m not, because I’m not having any more babies, I would buy ones that are easy to snap on and off. 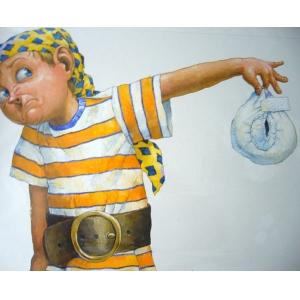 Well, look at that? I wrote that whole blog post as though we only ever used real nappies with our child. As though we never ever used disposables, when of course we did: I’ve just taken one off her there now. One of the “well, I’ll just use a disposable because we’ve got one here in a random packet” nappies, which are occasionally supplemented by the purchase of random packets at random times.

Disposable nappies are just wrong. Some people argue that it’s unfeminist to say this, because they have liberated women from the tyranny of laundering nappies. That’s only true if you think it should have been women’s job to wash them in the first place! The fight for gender equality should strike deeper than that.

The really annoying thing about despicable nappies is that they work better than washable ones. I’m just old enough to remember when this wasn’t the case. When I was thirteen, and my sister was a baby, disposable nappies were effectively bin liners with cotton wool in, with sellotape tabs holding them together. They leaked. They acted like the rubbish that they are. Nappy technology has raced ahead, and now we have triple elasticated legs, breathable covers, repositionable velcro tabs, and most importantly, gel absorbency that “locks away moisture” for hours and hours and hours. Just pop them on, and leave them, and leave them, and leave them…

Maybe you can sidestep the ecological argument by claiming that your baby’s nappies are only ever made of Fair Trade cornstarch and bamboo, with pictures of pandas on the front. But if you do use disposables you will, eventually, use Pampers, and Pampers are particularly wrong. Pampers are a big company, and they might get litigious about this, but bring it on, because 1) I’m skint anyway, and 2) I’d relish the chance to prove this in court:

Breastfed baby wee is fairly innocuous stuff. I’ve tried EC, remember, so I’ve had plenty of chance to check. Apparently, people in the Southern States of America used to use fresh wet diapers as a skin tonic – that’s how not-nasty breastfed baby wee is. Not if you put your baby in Pampers. They seem to add some strange chemical to their nappies, so that once they get wet, they stink. It renders parents unable to trust their noses – “I think she pooed, better change her, no? oh, just wet”. If you only ever use Pampers, you’d not know this.

Pampers marketing is everywhere. It arrives with the NHS baby pack. Their pretty pink Princess pull-ups are there, ready for when you try to start toilet training. And fail, because that “lock away moisture” core blocks any association for your child between weeing, and wetness.

Pampers Princess pull-up nappies position a picture of a high-heeled shoe strategically above your daughter’s crotch. As a statement of gender stereotyping, it’s beyond parody. My partner, upon seeing it, felt inspired to paraphrase George Orwell, at the end of 1984: “If you want a vision of the future – imagine a stiletto heel stamping on a female face, forever.”

The boys’ ones have anthropomorphised cars on. As an ex-roads protester, I don’t find this any better.

Children don’t toilet-train early any more, because disposables are so ubiquitous. Parents don’t “hold their babies out”, when it used to be a common sight. Night-time pull-ups are commonly sold for children up to the age of twelve! It’s funny, really, that as a parent of a breastfed toddler, I’m subject to societal accusations that I’m forcibly infantilising my child, when there’s this all-consuming, consumer product that does precisely that.

So that’s the lesson that I’d like parents to learn from the nappy-free movement. Not that you have to try this, just that there is knowledge out there that the disposable diaper companies don’t want you to learn.

4 Comments on ““Parents who practice elimination communication are overachievers.” Discuss.”