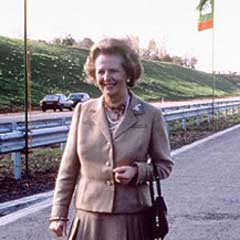 I don’t remember this happening before. When a UK politician dies, I don’t remember them being elevated to the status of royalty. I don’t ever recall a £10million public funeral with full military honours , Parliament being recalled for an entire day of eulogising and a nice fat expenses cheque for each MP. When Winston Churchill died, Parliament dedicated half an hour to speeches in his memory, then they got back on with the job of running the country.

And what is particularly abnormal is, that those who opposed Mrs Thatcher – those who would see a valid reason to celebrate her passing, if it also meant the death of the policies she initiated rather than the systematic rout of every alternative political view – have been characterised as mindless, blinkered and thoughtless, when the inverse is true.

The celebrations of Thatcher’s death that have spontaneously erupted across the nation, are sincerely founded in thoughtful remembrance.

The Thatcher years have been especially vivid for me for the past week. I remember my teacher staring disconsolately at the stationary cupboard in November of my ninth year, and explaining that the pitifully small amount of paper there was meant to last the school for the rest of the academic year. I remember six month waits for hospital appointments. I remember waiting for buses that didn’t come.

I was a child. I don’t remember thinking that things could have been any different, but now I realise that they could have been. We could have had health and education systems that were funded like the French (oh! their school meals on the French exchange visits! Fresh bread!) The public transport system on this small island could have been the envy of the world –instead we had a crushing road-building programme that spewed more traffic onto our streets. Britain was rolling in North Sea oil wealth. Imagine how Great it would have been if it had been used for our benefit? But Thatcher handed it to the millionaires and billionaires to squirrel away off-shore.

That’s what it was like for me, a middle-class child from Surrey. I can’t imagine what it would have been like to live in Sunderland, Liverpool or South Wales. Thatcher engineered the elimination of perfectly viable industries purely in order to destroy working-class communities. How dare the media now suggest that these communities are not entitled to their righteous grief?

This is what Thatcherism meant to me: 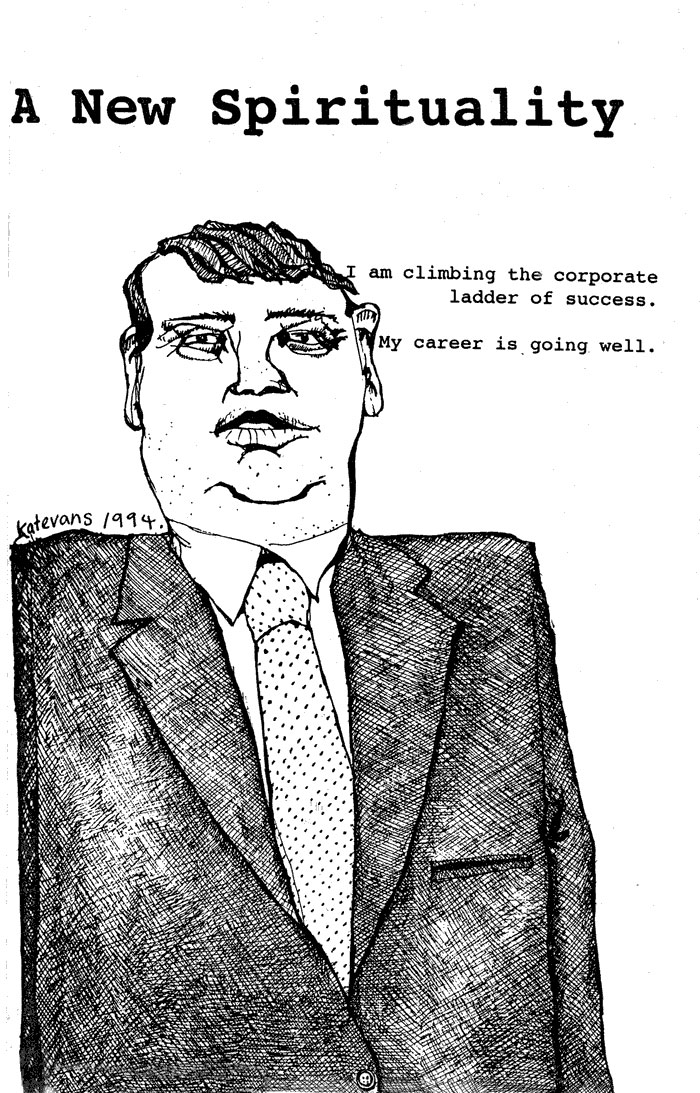 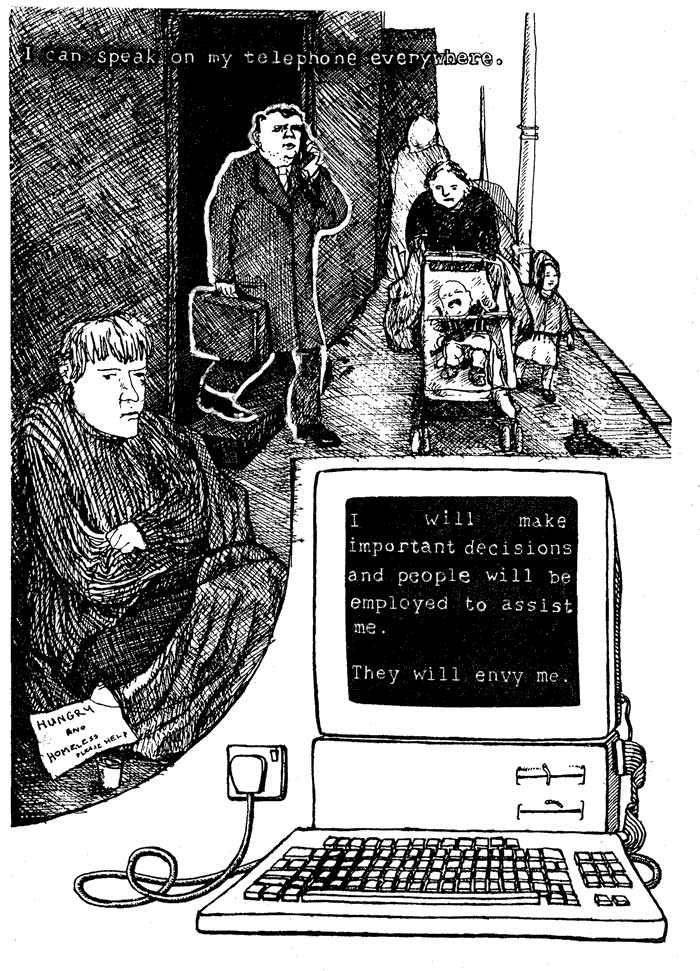 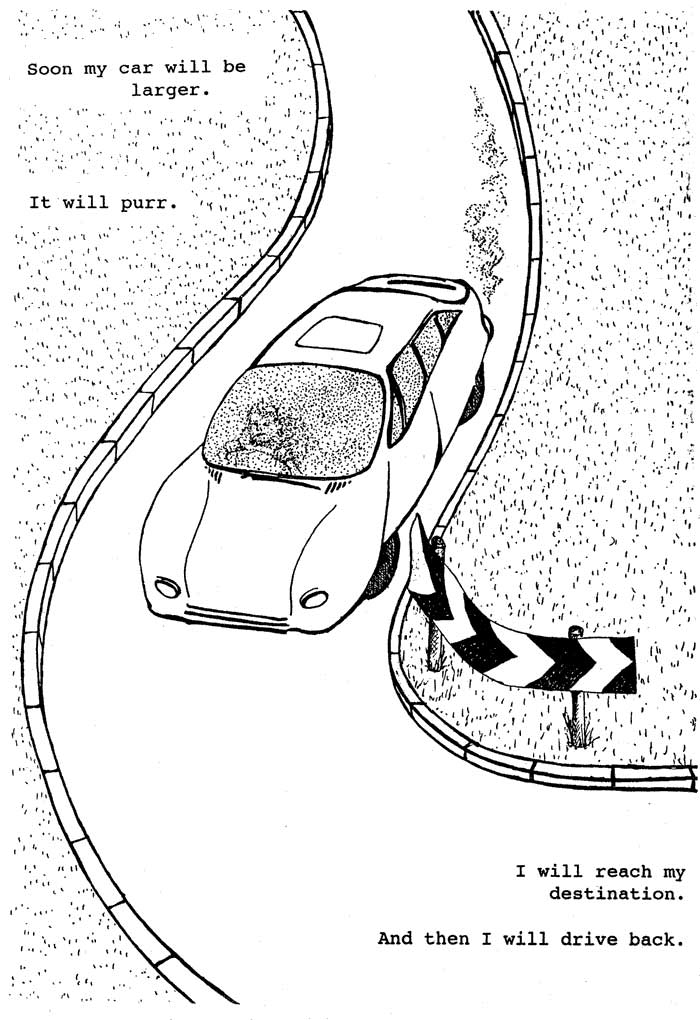 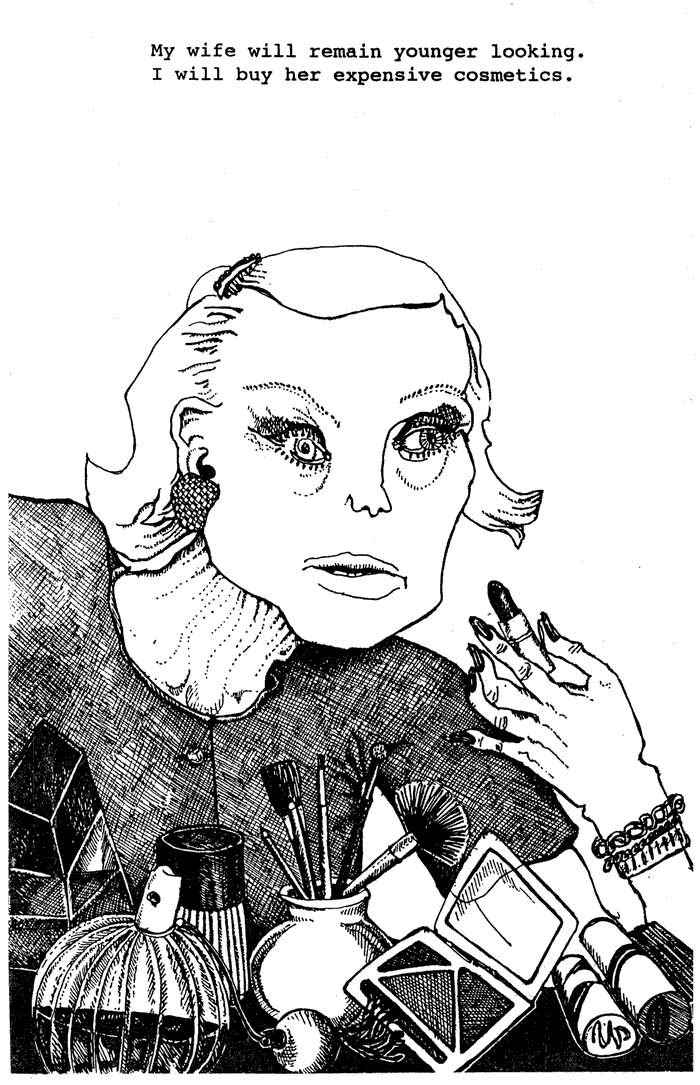 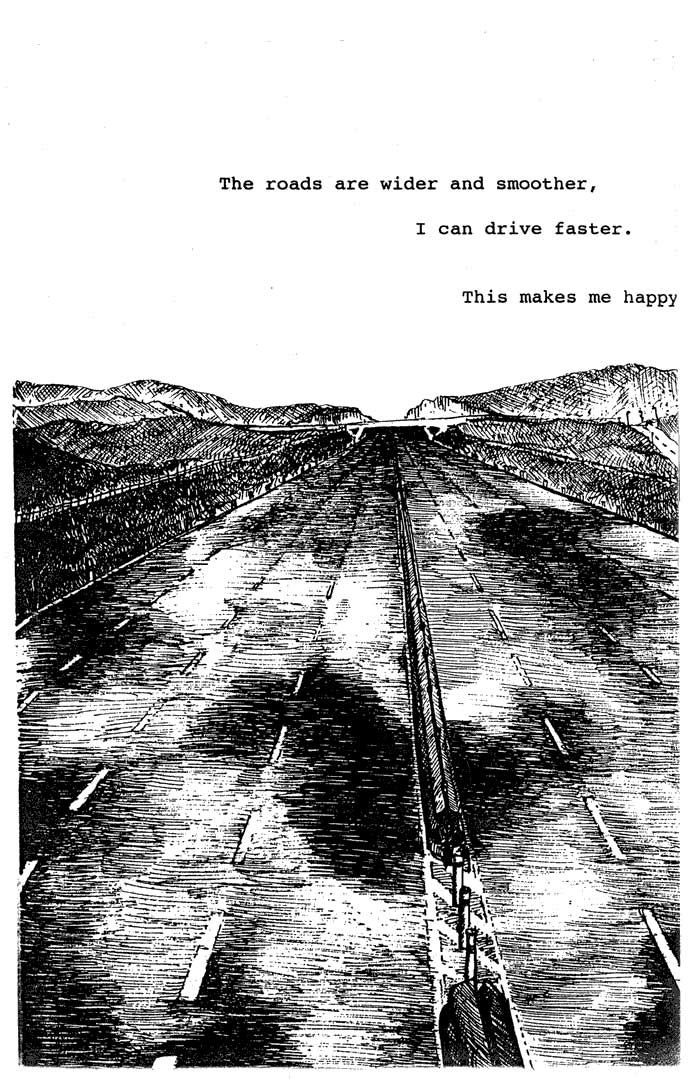 The title ‘A New Spirituality’ is nuanced. It refers to the Thatcherite culture of aspiration and greed that engulfed the country, but it is simultaneously a call for a new spirituality to replace that – one based on respect, communality and reconnection with our natural world.

Reviewing it now, I see with poignant clarity how strong a stranglehold Thatcherism still has on our society. On every frame of this cartoon, things are worse now, than they were thirty years ago. Corporations are more powerful. Distraction by digital media more ubiquitous. Single parents are still struggling, and homelessness is rising, and set to rise further as welfare cuts and the bedroom tax hit home. Women are more image-obsessed. Plastic surgery is more prevalent. And climate change is worse. Far worse.

We have had thirty years of hurtling in the wrong direction, losing precious time to achieve a sustainable future.

It’s a hollow victory to know that ultimately, history will judge Margaret Thatcher and find her wanting.